Why I Never Let My Kids Quit……Anything, Martial Arts Helps learn this….

This is a great article and applies to adults as much as kids.  When we quit something just because and don’t have a good reason we miss out on growth and opportunities and will more than likely regret the decision later on.  With kids, it teaches them that when it gets hard it’s okay to quit and that’s a horrible example or quality to have.  Martial Arts is something that needs to be taken over time.  It is not a 3 months here and there sorta thing.  There is also automatice goal setting and achievement built in.  Martial Arts Training is awesome and needs to be long term to get all the awesome benifits.

WHY I NEVER LET MY KIDS QUIT…ANYTHING 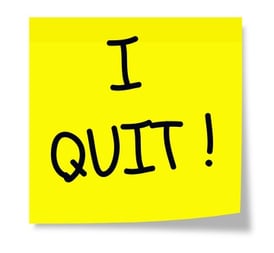 Quitting. We quit jobs, we quit marriages, we walk out on friendships and sometimes we let people down when the going gets tough. Sometimes it is necessary, even the right thing to do. Our kids quit teams and music lessons, art classes and after school programs. Sometimes it’s necessary, but sometimes they are bored or don’t like the coach or would just rather play video games at home. Deciding when to let your kids quit something, be it Gymboree, Little League or SAT prep, is a question that never goes away.

My kids have tried it all.  I have driven them to sports, found drum teachers, glass blowing lessons, painting and ceramics classes. They have tried their hands at their school newspapers, student government, ESL tutoring and computer programming camp, though why that qualifies as camp, I am sure that I will never know. In the end, they did not commit to most of these activities, but at the same time, I never let them quit a single activity.

Our rule is simple: Try any activity that we have the resources to make possible. Go once, go even twice but if you commit, I told my kids, there will be no quitting. At the risk of overgeneralizing, I think our children have so many choices of ways to enrich their lives that sometimes kids quit an activity as an easy response to frustration or boredom.

I regret many of the things in life that I quit, not because I was enjoying them when I left, but because if I had stuck it out and reached any sort of competency, I might have found that elusive enjoyment. In reality, this meant that my kids had to stick with the team until the season ended or an art class until the sessions ended. There was no walking out on computer camp because it was dumb or quitting drums because we recognized a dearth of musical talent. Every activity was to be seen through to completion.

Why was I so tough on them? Why draw what might seem like an arbitrary line in the sand?

Constancy, commitment and loyalty are all values I hoped to instill in my sons. Learning to endure something even when it became boring or unpleasant, when the coach or teacher didn’t like my kid, or vice versa, seemed a lesson truly worth teaching. I thought that the first time I let them walk away from something just because at that moment it didn’t suit them was the last time I had any credibility about endurance or resilience because the refrain henceforth would have been, “but you let me quit….”

Over time, my kids learned they were never going to be allowed to quit things so they should be careful about what they committed themselves to, because the word commit was going to be taken literally. The result? Good things and bad. Perhaps they didn’t try things they might have, although we usually made clear up front that you could try something (say by going once or twice) but after they signed up we were done with discussions.

But we had bad days, really frustrating end-of-my-rope days. There were tantrums and miserable practices and screaming scenes where I reminded them that this was something they had said they wanted to do. The upside? They had long, enduring relationships with instructors, coaches and teammates who changed and enriched their lives. One high school son has been on the same soccer team for nine years. It is the stuff that childhood memories are made of.

I sound so confident now, but on a weekly and sometimes daily basis I was wracked by self-doubt and misgivings and even now am not sure if what I did was right. The one thing that I have observed is this: My college-age sons have true passions, things they study in school and activities they are involved in outside of the classroom.

Passions are not like dreams for most of us, we don’t wake up one morning and find they have miraculously come to us in the night. Parents often talk about helping kids find their passions. But passions do not always reveal themselves unbidden, as often they are a result of hard work and dedication, the joy that comes of doing something well.

My kids’ passions are the result of endless hours spent learning a subject or mastering a skill. In each case, it is something that in childhood they begged and pleaded with me to quit and in late adolescence they have told me how much they enjoy. I made them stick things out because mastery, even at a child’s level takes time and repetition.

Competence breeds confidence but success and accomplishment breed self-esteem and social well-being. One of my college kids, by his choice, still plays on a soccer team.  Yet in a particular parenting low point, I pushed his 12-year-old self out of the car to make him play when the practices had ramped up and become far more difficult.

Martial Arts helps kids learn to stick with things and have fun along the way.  Through a series of goal setting and learning new skills kids are constantly motivated, inspired and gain competence.  I have personally trained 100 or more black belts kids.  They all have gained skills like self esteem, confidence, courage, tenacity and perseverance says 10th degree black belt Greg Silva.  Parents tell me “Of course the kids have highs and lows in training.  Many have wanted to quit along the way.  But that’s okay.  It’s okay to want to quit.   The real important things is to team up with the parents, child and instructor to make sure the child doesn’t quit when that feeling come along.